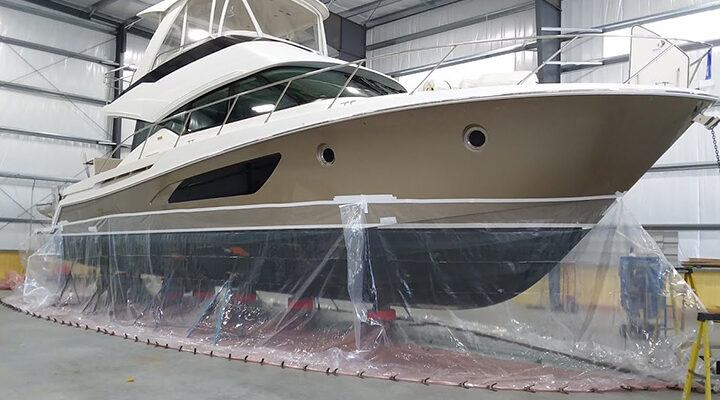 Hard to believe it is March 31st and it just snowed enough to plow. Billings Media Blasting is itching to get its back logged boat bottoms blasted but the weather does not want to cooperate. The rest of the week looks good and we hope to get a bunch done.

Instead of blasting boat bottoms today, Carlos is using plastic media in a blast cabinet to blast stainless steel pallets. We are removing many layers of paint without damaging the stainless steel.

Catching up on Blasting Boat Bottoms

Finally had a nice string of good weather. Working 7 days a week blasting boat bottoms to catch up from the cold start to the season. On rainy days we are working on putting together another blast cabinet system which we are going to use for “sand” abrasive blasting. This cabinet will allow us to blast smaller parts more productively rather then running a big compressor and dust collector for our blast booth. The plastic media blasting cabinet that we are already using is working great and are looking forward to finding more projects for it. Stay tuned for more changes constantly happening here at Billings Media Blasting. We are always trying to better our equipment and business to better serve our customers! 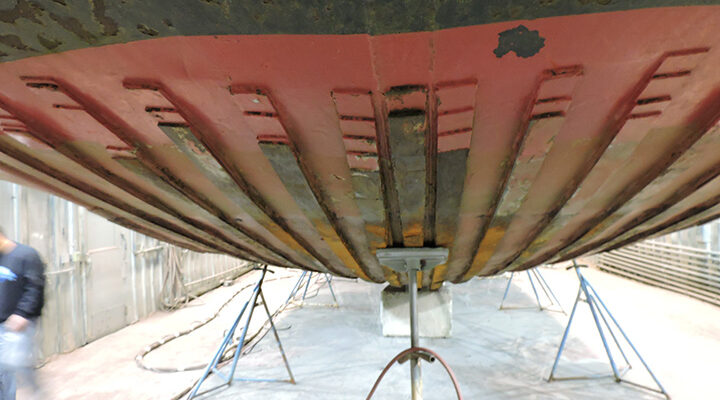 How did you spend your December? Here at Billings Media Blasting, in addition to preparing for the Christmas Holiday season, we spent the month blasting layer upon layer of top and bottom paint from the historic barge Hollister III, more widely known as the Connecticut River Ferry.

The ferry consists of a three-car barge, the Hollister III, as well as a diesel-powered tugboat named the Cumberland, which brings the barge back and forth across the river. It is the oldest continuously running ferry service in the United States and has been running since 1655. It actually started running before the towns it connects, Glastonbury and Rocky Hill, were founded. Originally a raft was poled across the Connecticut River, it was then powered by a horse on a treadmill before being upgraded to a steamship in 1876. If you are interested in seeing the Hollister III in action prior to our blasting job, click here.

Our project involved removing all the paint from both the barge itself as well as the on and off ramps on each end. Luckily, for us, we were able to blast in one of the heated paint-shop bays of The Essex Boat Works so the frosty December temperature didn’t interfere too much with our progress.

For this job, we specified and used crushed garnet as the primary blasting media, and we went through approximately 12,000 pounds of the stuff. It would have been much more but we employed our Spartan Vector industrial vacuum system and were able to recycle the garnet for two rounds of blasting. In addition, we also used our 20,000 CFM diesel dust collector to minimize ambient dust creation, which saved time on cleanup and were able to have two blasters going at all times, which shortened the blasting timeframe.

One of the challenges we ran into on this job was the significant amount of paint on the deck of this vessel; it had been painted every year since it was new with no stripping between coats. Take a moment to imagine what well over 30 coats of marine-grade paint might look like and you get the picture! To aid in the removal of this thick paint, we initially brought in a steel shot blasting machine and, to our surprise, soon discovered that was unable to remove it efficiently. We had to resort to hammers and used them to break the majority of the paint prior to blasting; this ended up being the most efficient and cost effective way to remove the paint.

At the end of the day, this was a fun and very satisfying project for us. We can’t wait until this summer to take the Hollister III across the Connecticut River and maybe scuff a little of that deck paint off so the job won’t be as hard next time.

Here are some before and after pictures of the job.